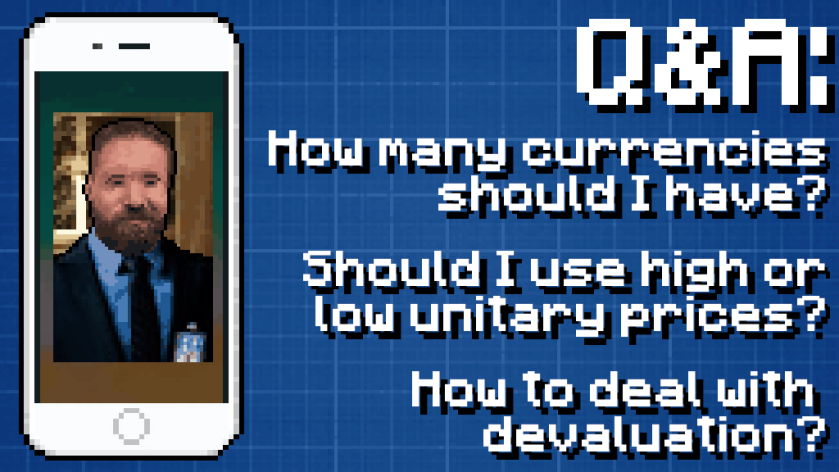 The industry of F2P mobile gaming is possibly the most competitive space of game development right now. Every little thing matters to get that extra LTV increment that will allow you to beat your competition.

Some of the topics here might be deceivingly simple at first… but taking the wrong decision may have problematic implications later and require many hours for you and your team to fix.
If you’re struggling with some of these questions, hopefully these answers can help you.

This post is just a preview of a bigger article on game currencies that I’ll publish soon, which deals on these topics (and others) in way more depth, on which I’ve been working on the last weeks. But still, I felt that these questions were juicy enough to be their own thing.

I may repeat this Q&A format on the future, so send me more questions that you want answered : D

HOW MANY CURRENCIES SHOULD A GAME HAVE?

There’s not an exact number. It depends on how many your game really needs and how many can your audience manage. The general rule is having two (a soft currency and a hard currency), so I’d suggest you stick to that number if you have doubts.

My advice if you plan to add additional currencies is to consider if they’re filling a role that maybe could be filled with an already existing one and try to keep it low.
Keep in mind that every currency that you add requires to add new sources and sinks, which will make the game more difficult to understand and manage by the player.

On the other hand, giving the same currency on multiple sources devaluates the individual value of each source. And makes reward balancing very difficult because some systems can cannibalize the rest if they become the best way to obtain currency X. So if your game has multiple systems and you want the player to play them all, it’s a good idea to isolate each system with a dedicated currency.

In my own experience, having less than two currencies is problematic because you will struggle granting rewards without harming the overall economy (since the only currency you have will be hard).

But even then, you can find workarounds: For example, several Match3 puzzles that have a single currency tend to reward energy and boosters, which fill the role of the soft currency when it comes to rewards.

SHOULD I USE BIG OR LOW UNITARY PRICES ON CURRENCIES?
DOES IT EVEN MATTER?

This topic does matter a bit more than what developers tend to think, and it has implications that go beyond using low numbers on currency to make it more intuitive or valuable for players.

When it comes to hard currency, the main thing to take in consideration is how many sources of free hard currency is your game going to have.

Is your game going to use hard currency rewards to incentivize ad consumption (i.e. rewards for watching video ads, offer wall, etc…), or grant it when players bring friends into the game (virality rewards…)?
If so, then you will prefer having a low unitary price, because it will give you more degree of control on the value you’re rewarding for free.

On the other hand, high unitary prices on hard currency will make hard to grant rewards that aren’t super valuable: If for the sake of simplicity, you decide that 1 Hard Currency equals 1$, then it’ll be hard for you to sustain a reward of 1 Hard Currency per video ad…

But of course, you don’t want to go so high that a single unit of hard currency is unvaluable because it doesn’t equal enough value in real money to buy anything in the game.
Ultimately, my advice here is that you check what the competitors are doing, and aim for something in a similar range. That way you’ll make sure that your videoads aren’t more cannibalizing to your economy than the genre standard…

Since its relation with IAP is a bit more lax, in soft currency we have a greater range of decision. As a rule of thumb, soft currency unitary prices should be way lower than hard currency, because it’s a less exclusive resource.

How low the unitary value should be exactly, though, depends on both the amount of sources of soft currency rewards you’re going to have, how much grinding are you expecting, and how much inflation you expect.

If you are going to have many sources of soft currency and a lot of grinding, then it’s better to go on the direction of having very low unitary values, so that smaller amounts can be granted without representing a lot of progress.
While if access to your soft currency is going to be limited (like in Township, where getting coins requires completing orders which requires time and are limited in amount, meaning that coins are a strong bottleneck), then higher unitary values may make more sense.

HOW TO DEAL WITH CURRENCY DEVALUATION?

It’s natural. As the player progresses, you want to increase the rewards. Very likely, to contribute to disguise the fact that costs are also increasing, and at a bigger pace.
This means that a unit of soft currency will have radically different values at every step of the progression, which generates all sorts of problems:
How can I keep the IAP soft currency packs worth buying?
How can I balance game rewards for players at different progression?

During my career I’ve tried several approaches to fix this issue, mostly based on generating multiple balancings for different stages of progression.
An in the end I’m not happy with any of the solutions, because it means extra work and a harder maintenance, and players think it’s an unfair deal at the beginning of the game (they recommend early players to avoid paying for soft currency until they have progressed).

If you want to go in this direction, I’d advise you to do it by creating a multiplier that acts dynamically (i.e. gold_multiplier*player_level), as opposed to a defined set of balancings, because that will make the maintenance a bit easier.

But ultimately, I think that currency devaluation is the type of battle that you win by avoiding it entirely. For example:

Or you prefer the answer in a metaphor, here’s it is:
A disciple asked a famous general: “If I’m in a battle where my army completely surrounded by enemies that have more and better troops, hold a higher position and I lack any fortifications, how can we win?”.
And the answer was: “Don’t fight such battle“.

I hope you found it useful. Like I said at the beginning, if you want more of this stay tuned because very soon I’ll post a bigger article on game currencies that has taken me several months of research @.@

If you’re looking for more tips on how to design IAPs, check this other post!

And if you have juicy questions that want to be dealt with, send them over!
Enjoy the holidays and be safe, folks!